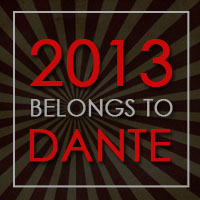 Welcome to my stop on the 2013 Belongs to Dante blog event hosted by YA Bound.
Click HERE to see the rest of the blog tour schedule!

The Collector is a hugely fun book with a main character, Dante Walker, that is unique in his world view and his humor. Victoria Scott succeeds in creating a character as insulting as he is likeable. It’s an impressive skill to write a character readers can scoff at their crass thoughts yet love at the same time. Here’s what Dante thinks about cats,

At the end of the walkway is a cat. It struts with arrogance. You’d think it just won the Nobel Prize. But it didn’t. Know why? Because it’s a freakin’ cat. In case you missed the memo: I. Hate. Cats. I loathe them. They’re built with creepy little teeth and finger blades. I don’t know about you, but I’ll pass on that freak show. 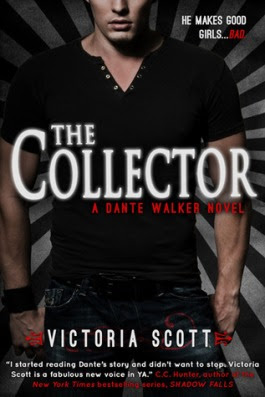 Summary (via Goodreads):
Dante Walker is flippin’ awesome, and he knows it. His good looks, killer charm, and stellar confidence has made him one of hell’s best—a soul collector. His job is simple, weed through humanity and label those round rears with a big, red good or bad stamp. Old Saint Nick gets the good guys, and he gets the fun ones. Bag-and-tag.
Sealing souls is nothing personal. Dante’s an equal opportunity collector and doesn’t want it any other way. But he’ll have to adjust, because Boss Man has given him a new assignment:
Collect Charlie Cooper’s soul within 10 days.
Dante doesn’t know why Boss Man wants Charlie, nor does he care. This assignment means only one thing to him, and that’s a permanent ticket out of hell. But after Dante meets the quirky, Nerd Alert chick he’s come to collect—he realizes this assignment will test his abilities as a collector, and uncover emotions deeply buried.

Check out my review of The Collector here

I’m a YA writer represented by Laurie McLean. Author of THE COLLECTOR (Entangled Teen, April 2013) and THE BRIMSTONE BLEED (Scholastic, 2014). I have a master’s degree in marketing, and live in Dallas with my husband. When not writing, I can be found munching cotton candy and snuggling obese cats.

Links:
Buy on Amazon
Buy on Barnes and Noble

Lucky for us the second book of the Dante Walker series will be available in August 2013. We don’t have to wait long, good thing too-because I’m not patient.  Add The Liberator to your Goodreads shelf Summary:
Dante has a shiny new cuff wrapped around his ankle, and he doesn’t like that mess one bit. His new accessory comes straight from Big Guy himself and marks the former demon as a liberator. Despite his gritty past and bad boy ways, Dante Walker has been granted a second chance.

When Dante is given his first mission as a liberator to save the soul of seventeen-year-old Aspen, he knows he’s got this. But Aspen reminds him of the rebellious life he used to live and is making it difficult to resist sinful temptations. Though Dante is committed to living clean for his girlfriend Charlie, this dude’s been a playboy for far too long…and old demons die hard.

With Charlie becoming the girl she was never able to be pre-makeover and Aspen showing him how delicious it feels to embrace his inner beast, Dante will have to go somewhere he never thought he’d return to in order to accomplish the impossible: save the girl he’s been assigned to, and keep the girl he loves.

Is this one on your radar? Blood Rose Rebellion
Blog Tour for Haze- Guest Post by Paula Weston