Of course this movie is based on Orson Scott Card’s classic sci-fi book, Ender’s Game. Are you planning to see the movie when it comes out in November? Check out Tor.com to see more details about the movie and poster.

Its been confirmed! Kate Winslet will be in the upcoming Divergent movie; she will play Jeanine Matthews the leader of the Eurdite group. Confirmed cast thus far include Shailene Woodley, Theo James, Jai Courtney, Zoe Kravitz, Ansel Elgort and Maggie Q. There are rumors but no confirmation that Aaron Eckhart will play Beatrice (Tris) Prior’s father, Andrew.

News that Four has finally been cast–Theo James has the honor. Check out Veronica Roth’s take on him and some more casting news here
Divergent Book Trailer:

Divergent Summary (via Goodreads)
In Beatrice Prior’s dystopian Chicago world, society is divided into five factions, each dedicated to the cultivation of a particular virtue–Candor (the honest), Abnegation (the selfless), Dauntless (the brave), Amity (the peaceful), and Erudite (the intelligent). On an appointed day of every year, all sixteen-year-olds must select the faction to which they will devote the rest of their lives. For Beatrice, the decision is between staying with her family and being who she really is–she can’t have both. So she makes a choice that surprises everyone, including herself.

During the highly competitive initiation that follows, Beatrice renames herself Tris and struggles alongside her fellow initiates to live out the choice they have made. Together they must undergo extreme physical tests of endurance and intense psychological simulations, some with devastating consequences. As initiation transforms them all, Tris must determine who her friends really are–and where, exactly, a romance with a sometimes fascinating, sometimes exasperating boy fits into the life she’s chosen. But Tris also has a secret, one she’s kept hidden from everyone because she’s been warned it can mean death. And as she discovers unrest and growing conflict that threaten to unravel her seemingly perfect society, she also learns that her secret might help her save those she loves . . . or it might destroy her

Today i09 revealed the cover for Siege and Storm the second of the Grisha series. The cover is perfect and goes so well with the cover of Shadow and Bone. I can’t wait until June to get my hands on it!

Summary via Goodreads
Darkness never dies.
Hunted across the True Sea, haunted by the lives she took on the Fold, Alina must try to make a life with Mal in an unfamiliar land, all while keeping her identity as the Sun Summoner a secret. But she can’t outrun her past or her destiny for long.

Check out the cover reveal on oi9

Read my review of book one: Shadow and Bone 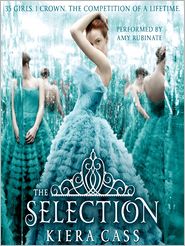 After the first attempt at having The Selection by Kiera Cass hit the small screen (only to have it fall through) the CW have ordered a second pilot. Originally, Aimee Teegarden was attached to play the lead role of America Singer but is no longer said to be working on the show. You can read more on EW’s site here.

Summary (via Goodreads):
For thirty-five girls, the Selection is the chance of a lifetime. The opportunity to escape the life laid out for them since birth. To be swept up in a world of glittering gowns and priceless jewels. To live in a palace and compete for the heart of gorgeous Prince Maxon.

But for America Singer, being Selected is a nightmare. It means turning her back on her secret love with Aspen, who is a caste below her. Leaving her home to enter a fierce competition for a crown she doesn’t want. Living in a palace that is constantly threatened by violent rebel attacks.

Then America meets Prince Maxon. Gradually, she starts to question all the plans she’s made for herself–and realizes that the life she’s always dreamed of may not compare to a future she never imagined