Today I am with the author of the beautifully written historical fiction novel The Dark Unwinding, Sharon Cameron. She was kind enough to answer my questions about her inspirations, if she’d own an automaton and what she’s currently reading.

You’ve created such vivid, descriptive locations for The Dark Unwinding. What inspired Stranwayne Keep?
The situation at Stranwyne Keep is very much inspired by a real estate in England, Welbeck Abbey. In the Victorian era Welbeck was an enormous house with a very eccentric Duke, pink rooms, an underground ballroom and miles of gaslit tunnels. While the Duke at Welbeck was certainly not an inventor, he did hire an enormous amount of men to build his extraordinary projects at Welbeck, saving them from lives of hunger and poverty. He might have been crazy and he definitely squandered his fortune, but in an unusually noble way, I think.

Your characters: Katharine, Uncle Tulman (Tully), Lane, Mrs. Jeffries, the entire cast each is very unique and well developed. Did you create them or their world first?
I’ve always believed that people are shaped just as much by their environment as their DNA, so I almost always create a setting in my head first. Then I imagine what kind of person might inhabit that world, and how that world might affect their natural personality. Characters aren’t really “real” until you know where and how they’ve lived, I think.

Katharine’s uncle is one of the most endearing characters I’ve read, I adore him referring to her as ‘Simon’s Baby.’ What inspired his character?
Uncle Tully is a mixture of real people who have lived with autism and savant syndrome (and with all the anxiety and obsessive compulsive disorders that can go with that) and a few specific creative geniuses, like Oliver Heaviside  (bottom left) and Nikola Tesla (bottom right). Brains that work differently are absolutely fascinating to me, and with Uncle Tully, I not only wanted to explore an unusual way of thinking, but also a very childlike way of thinking. A genius who was also an innocent. He was super fun to write! 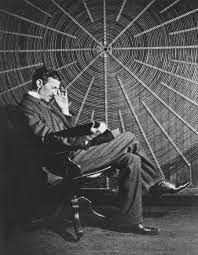 Automatons play a unique role in The Dark Unwinding. They are incredibly magical but also a bit creepy. What gave you the inspirations for Uncle Tully’s inventions?
I don’t think they’re a “bit” creepy, I think they’re horrifically creepy! All the automatons are inspired by real machines that were built between the 1740s and the 1850s. Not only were these automatons engineering marvels, but they were famous, touring the world to amaze and frighten the people of the time. There are some great video examples of automatons on my website.

Would you own an automaton? If so what would it do?
Oh, yes. I’d definitely own one. But then I would box it up and put it in a closet where it couldn’t look at me!

What can you tell us about the next book in the series coming out this fall, A Spark Unseen?
Hmmm! I can tell you that the story picks up eighteen months after The Dark Unwinding ends, and that it involves steamer trunks, a missing young man, piles of human bones, lightning, a palace, a tiny moustache, and that there’s a death in the first chapter.

Have you ever considered writing any novellas set in The Dark Unwinding world? Maybe from another character’s point of view, or their back story?
I have tons of little novellas in my head, from all the back stories of the characters to the little things I think happened when Katharine wasn’t present in the book. I haven’t considered making any of them a true novella yet, but one of those little back story novellas definitely led to A Spark Unseen.

Now to some random questions,
Is there a book or character you wish you had written?
I wish I had written Eugenides from Megan Whalen Turner’s “The Thief” series. He’s so tricky and amazing! But I also suspect that he’s smarter than me, which makes me think I could have never written him anyway.

What are you reading right now?
I just finished The Archived by Victoria Schwab, which was awesome, and just re-read Ruta Sepetys’s Out of the Easy. Love that Ruta!

Are you working on anything outside of The Dark Unwinding world?
Oh yes! New projects abound! Having loads of fun researching 18th century spy gadgets at the moment.

Thank you so much for stopping by My Friends Are Fiction. I cannot wait to get my hands on the A Spark Unseen.

Sharon Cameron lives in  Nashville, Tennessee. She has been a classical piano teacher, full-time mom, part-time genealogist, chair of a non-profit for a local theater group and a coordinator of the SCBWI Midsouth Fall Conference. The Dark Unwinding was her debut novel and winner of a 2013 Crystal Kite Award.

Look for A Spark Unseen from Scholastic Press September 2013

You can find Sharon Cameron on

“When Katharine Tulman wakes in the middle of the night and accidentally foils a kidnapping attempt on her uncle, she realizes that Stranwyne Keep is no longer safe for Uncle Tully and his genius inventions. She quickly flees to Paris, where she hopes to remain undetected as she searches for the mysterious and handsome Lane, who is suspected to be dead.

But the search for Lane is not easy, and Katharine soon finds herself caught in a web of political intrigue. From the court of Napoleon III to the underground tunnels of Paris, Katharine will have to decide how a dangerous weapon can be kept from both a queen and an emperor, and whom she can trust to make her uncle safe once and for all.”

Read my review of The Dark Unwinding