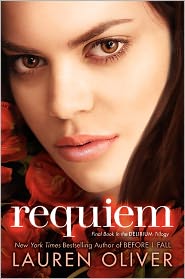 Summary (via Goodreads):
They have tried to squeeze us out, to stamp us into the past.
But we are still here.
And there are more of us every day.

Now an active member of the resistance, Lena has been transformed. The nascent rebellion that was under way in Pandemonium has ignited into an all-out revolution in Requiem, and Lena is at the center of the fight.

After rescuing Julian from a death sentence, Lena and her friends fled to the Wilds. But the Wilds are no longer a safe haven—pockets of rebellion have opened throughout the country, and the government cannot deny the existence of Invalids. Regulators now infiltrate the borderlands to stamp out the rebels, and as Lena navigates the increasingly dangerous terrain, her best friend, Hana, lives a safe, loveless life in Portland as the fiancée of the young mayor.

Maybe we are driven crazy by our feelings.
Maybe love is a disease, and we would be better off without it.
But we have chosen a different road.
And in the end, that is the point of escaping the cure: We are free to choose.
We are even free to choose the wrong thing.

Requiem is told from both Lena’s and Hana’s points of view. The two girls live side by side in a world that divides them until, at last, their stories converge

No outright spoilers but I will reference the ending

The Story:
The prior books both had heart-wrenching endings that left me downright angry it was over and I’d have to wait for the next book to be released. I have been looking forward to this last installment and couldn’t wait to dive in once I had it in my hands, overall I was not disappointed.

In Requiem there are dual point of views: Lena and Hana. Both stories were equally engaging and emotionally charged. Oliver wrote wonderful slow scenes that progressed the story but were also based on Lena and Hana’s emotions. She also mixed in some wonderfully written action sequences that had me skimming paragraphs so I could know the outcome (then going back and reading slowly to really enjoy it). Most of the book moves at a comfortable pace and rarely was I tired of the setting or felt that the story arc was not progressing. It had a great build up to the main conclusion, weaving Lena and Hana’s stories together, but when as I neared the end I began to fret that all the loose ends couldn’t possibly be tied up in the few remaining pages.

There has been a lot of talk about how Oliver chose to end the series, some people have felt disappointed and underwhelmed. I knew this going in so I believe it lessoned the blow for me. I wasn’t that disappointed but I would have enjoyed more closure.

The Characters:
I was happy to delve more into Hana’s story after she was cured and found that I enjoyed her story as much as Hana’s. Not only was I invested in her character I was surprised by some of her admissions. And the mayor’s son, Fred… what a character he turned out to be. Seeing Portland through Hana’s cured eyes gave me insight into a society where love is a disease and attempted to be removed. All the cured people Hana encounters through her journey all seem harsh, rude, bitter, indifferent or downright evil.

Lena continued to be pulled between Alex and Julian yet the romantic aspects were toned down in this book focusing more on the rebellion. I got a sense that it was so much more than just Lena’s choice of men and more about the fight for the right to have a choice. I enjoyed her character growth and watching her really be capable of being a leader.

Final Thoughts:
I enjoyed the journey Oliver took me throughout the series and I was sad to see it end. Overall, I enjoyed Requiem and recommend anyone who enjoyed the prior books to pick this one up.  You might not have the exact closure you seek but I felt it was a good series ending overall.