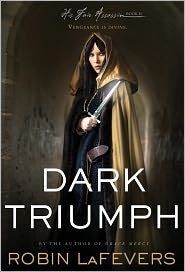 The Summary (via jacket copy):
Sybella arrives at the convent’s doorstep half mad with grief and despair. Those that serve Death are only too happy to offer her refuge-but at a price. Naturally skilled in the arts of both death and seduction, Sybella, the convent realizes, is one of their most dangerous weapons.

But those assassin’s skills are little help when the convent returns her to a life that nearly drove her mad. Her father’s rage and brutality are terrifying, and her brother’s love is equally monstrous. and while Sybella is a weapon of justice wrought by the god of Death himself, He must give her a reason to live. When she discovers an unexpected ally imprisoned in the dungeons, will a daughter of Death find something other than vengeance to live for?

The Story:
The second book in the His Fair Assassin trilogy, Dark Triumph, is told from Sybella’s point of view. She was a secondary character in Grave Mercy; comrade and sister at the convent to Ismae. After reading Grave Mercy I didn’t have much of an opinion of her and worried that I wouldn’t enjoy reading from her point of view (I was so enamored with Duval and Ismae). I should not have feared because LaFever has crafted a vulnerable yet courageous heroine in Syeblla. I was quickly immersed in her life’s drama and feared for her future, it did not take long to become enraptured by her tale and personality.

Dark Triumph overlaps with Grave Mercy for the first five chapters but from Sybella POV. We journey into the hell of d’Albret’s household, seeing first hand the monster that wants to marry Anne, the duchess of Brittany for political gain through any means necessary. The first book focused heavily on the political intrigue surrounding the nobles. While Dark Triumph had glimpses of the political it focused much more on fighting and action. We witness our handmaiden of Death at her finest as she uses her training and weapons to dispense justice and work to find her own meaning in life.

The Characters:
Sybella’s life before she went to the convent is heart breaking and yet she survives and seeks a way to cope with what she’s lived through. As readers we stand witness to the horrors she withstood being raised at the hands of a monster and what a sacrifice it was for her to be sent back for the sisters of Mortain and the duchess. One of my favorite aspects of Sybella’s character was her fierceness,

Because I want to back away from him, I force myself to move forward until there is but a handbreadth between us.

I admired her ability to never back down and to be so brave in the face of horrors unimaginable. This courageousness and unwavering strength gave depth and hope to a story that could have been very dark and depressing.

The Beast of Waroch is an ogre of a man capable of killing many in battle yet he has a heart as big as he is and a sense of justice. I am a sucker for misjudged characters that are far deeper than their outer façade. Sybella and the Beast’s relationship felt realistic and instead of telling us how they felt LaFever was skilled at showing the reader through their interactions and dialog.

Final Thoughts:
I wasn’t sure how I would respond to reading a sequel where the character I had loved so much in the first installment was only a side character, but Robin LaFever was fully capable of gaining not only my interest but love for Sybella. I can not wait until Annith’s point of view is told through  Mortal Heart, the final book in the trilogy. I recommend this series for fans of fantasy and historical fiction genres.

Check out Robin LaFever’s website to read further about Anne of Brittany, Count D’Albret and the time period.