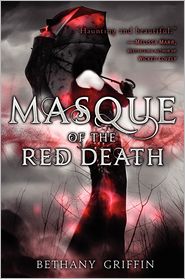 Summary (via Goodreads):
Everything is in ruins.

A devastating plague has decimated the population, and those who are left live in fear of catching it as the city crumbles around them.

So what does Araby Worth have to live for?

Nights in the Debauchery Club, beautiful dresses, glittery makeup . . . and tantalizing ways to forget it all.

The Story:
Masque of the Red Death is inspired by Edgar Allan Poe’s gothic short story of the same title. Poe’s story centers on Prince Prospero as he hides from the Red Death, a horrible plague, ravages his land. He invites all the nobles and they have a masked ball in an effort to stay secluded and hide from the death and despair. You can read the full short story here.

Griffin’s novel takes some of these gothic elements and presents them in a dark tale with bits of steam punk sprinkled in. There is no set time period or location, leaving this all to the reader’s imagination.

The plague destroying the land is called the Weeping Sickness and it causes weeping sores and is highly contagious. With it being air borne masks are required to survive but only the rich can afford them. I found this idea unique and enthralling. The imagery of people with masks covering the majority of their faces really stuck with me. This idea of seeing someone’s face being rare and even intimate and having to read people’s emotions when you can’t see their smiles or frowns; just a really wonderful concept.  Griffin was able to capture beauty even in a city in the midst of destruction.

The Characters:
Any problems I had with the book came with the characters. I felt that Araby was hard to connect to and many of her choices seemed so naïve and careless I was constantly annoyed with her, especially in the beginning. She did seem to grow into herself and mature as the novel progressed which I was very grateful for.

There is a dreaded love triangle, I’d have preferred there not to have been. At first I could not find any reason for the attraction to Elliot. His personality was not endearing or alluring to me. His arrogance irked me and I was frustrated with Araby’s trust in him. I preferred Will and really enjoyed his interactions with his young siblings. I thought the scenes with the family together were touching and some of my favorites.

Final Thoughts:
I actually have begun to appreciate Masque of the Red Death more after absorbing it for a couple of days. As I read there were moments I was eager for more to happen and I was frustrated with the main character, but upon reflection I enjoyed the world building and gothic elements more than my annoyances.

Look for the next in the series, Dance of the Red Death, coming June 11, 2013. I will post my review in the next few days.