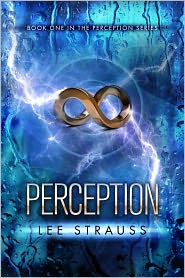 Thank you All Night Reads for a copy of this title in exchange for an honest review.

Summary (via Goodreads):
Eternal Life is To Die For.

Seventeen year old Zoe Vanderveen is a GAP—a genetically altered person. She lives in the security of a walled city on prime water-front property along-side other equally beautiful people with extended life spans.

Her brother Liam is missing.

Noah Brody is a natural who lives on the outside. He leads protests against the GAPs and detests the widening chasm they’ve created between those who have and those who don’t. He doesn’t like girls like Zoe and he has good reason not to like her specifically.

Zoe’s carefree life takes a traumatic turn. She’s in trouble and it turns out that Noah, the last guy on earth she should trust, is the only one who can help her.

The Story:
Perception had some interesting concepts. I enjoyed thinking about what a society would look like once the ability to extend life presented itself. Strauss created a world with only the wealthy having the ability to extend their lives, the others live on the fringes. Of course, this creates a social hierarchy associated with who has been genetically altered versus those that have not either due to choice or inability. The science of how the advances were made was barely touched upon though Strauss does give details into how the city and it’s citizens looks. Overall, the future Strauss created was not one I’d want to read further about or live in.

The Characters:
The characters and the romance lacked for me. Zoe wasn’t overly likable and try as I might I could not feel connected to any of the characters. I didn’t care that Liam, Zoe’s brother, was missing. Zoe referred to her parents by their first names which I didn’t care for, and also confused me in the beginning when I was trying to remember who everyone was. She does have a substantial  amount of growth throughout the novel.

The romance was rushed and I never felt the moment where the two leads fell for each other. Zoe and Noah had electric pulses when they touched, which always make me roll my eyes. I would say that Noah Brody was probably the best character and he had the most depth to me because of his religious views and his connections and dedication to his family.

Final Thoughts:
Perception wasn’t a bad book just not one I felt very connected to.