Summary:
Through a Faustian bargain, Edie Kramer has been pulled into the dangerous world of the Immortal Game, where belief makes your nightmares real. Hungry for sport, fears-made-flesh are always raising the stakes. To them, human lives are less than nothing, just pieces on a board.

Because of her boyfriend Kian’s sacrifice, she’s operating under the mysterious Harbinger’s aegis, but his patronage could prove as fatal as the opposition. Raw from deepest loss, she’s terrified over the deal Kian made for her. Though her very public enemies keep sending foot soldiers–mercenary monsters committed to her destruction–she’s not the one playing under a doom clock. Kian has six months…unless Edie can save him. And this is a game she can’t bear to lose.

My Thoughts:
I enjoyed the first in this series, Mortal Danger, fairly well. I had a connection with Kian and Edie and some of Aguirre’s descriptions were incredibly creepy. I figured Public Enemies would be more of the same so I was eager to try it out. Sadly, even from the start, I was afraid this book wasn’t going to work for me. I had lost connection to the characters- maybe a reread would have helped. I didn’t really care about Kian and Edie’s relationship any longer. The writing wasn’t nearly as strong as it was in the first book. I felt that there was a lot of telling so I was unable to really get into the storyline.

I only read up to 39% so I’m not certain how things concluded but there was a more in depth look into a character, the Harbinger, (I honestly can’t remember how much this character was mentioned in the first book) that felt really stereo-typical to me. I felt that I’d read this same character many times before. He was a dangerous yet charming guy, misunderstood perhaps and I could see it going into love triangle territory. I have NO CLUE if it actually did since I didn’t finish. I could be completely off base there. The saddest part though was that even though his character felt done before he was the most interesting part of what I read.

Final Thoughts:
I maybe should have stuck this one out since Ann Aguirre is such a wonderful writer. As I neared the mid-way point and was still not enjoying it I decided I’d move on to something else. If you’ve read it let me know what you think. Did I make a mistake in giving up?

Also, what do you think of the change of pace concerning the cover art?

A copy of this book was given to me by the publisher in exchange for an honest review.

Edie Kramer has a score to settle with the beautiful people at Blackbriar Academy. Their cruelty drove her to the brink of despair, and four months ago, she couldn’t imagine being strong enough to face her senior year. But thanks to a Faustian compact with the enigmatic Kian, she has the power to make the bullies pay. She’s not supposed to think about Kian once the deal is done, but devastating pain burns behind his unearthly beauty, and he’s impossible to forget.
…

END_OF_DOCUMENT_TOKEN_TO_BE_REPLACED

This week I’m reading Horde by Ann Aguirre. I have just started this one but I am so excited to dive into it. I loved the prior two books in the series, Enclave and Outpost. 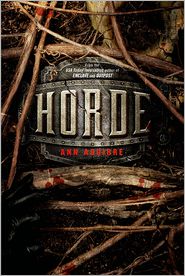 Still twitching, they hit the grassy ground, smearing green with red, though in the dark it was impossible to tell. Blood spurted from the stumps, then the beast lunged at me with its other talons. pg. 30

Summary (via Goodreads):
The epic conclusion to the USA Today bestselling trilogy.

The horde is coming.

Salvation is surrounded, monsters at the gates, and this time, they’re not going away. When Deuce, Fade, Stalker and Tegan set out, the odds are against them. But the odds have been stacked against Deuce from the moment she was born. She might not be a Huntress anymore, but she doesn’t run. With her knives in hand and her companions at her side, she will not falter, whether fighting for her life or Fade’s love.

Ahead, the battle of a lifetime awaits. Freaks are everywhere, attacking settlements, setting up scouts, perimeters, and patrols. There hasn’t been a war like this in centuries, and humans have forgotten how to stand and fight. Unless Deuce can lead them.

This time, however, more than the fate of a single enclave or outpost hangs in the balance. This time, Deuce carries the banner for the survival of all humanity.