It’s been awhile since I’ve posted a Waiting on Wednesday just because I didn’t have any upcoming releases that I didn’t think everyone knew about. Finally this week all the Spring 2014 books are making the rounds so I’ve got some I’m pretty excited about.

Waiting on Wednesday is a weekly meme hosted by Breaking the Spine that spotlights upcoming releases we are highly anticipating. This week’s pre-publication “can’t-wait to-read” selection is: A Death-Struck Year by Makiia Luecer 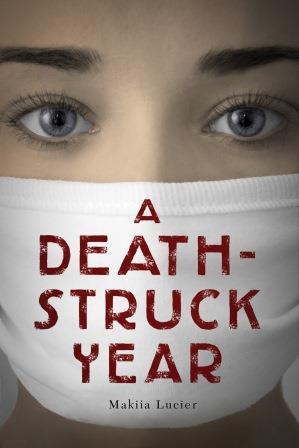 Summary:
A deadly pandemic, a budding romance, and the heartache of loss make for a stunning coming-of-age teen debut about the struggle to survive during the 1918 flu.

For Cleo Berry, the people dying of the Spanish Influenza in cities like New York and Philadelphia may as well be in another country–that’s how far away they feel from the safety of Portland, Oregon. And then cases start being reported in the Pacific Northwest. Schools, churches, and theaters shut down. The entire city is thrust into survival mode–and into a panic. Headstrong and foolish, seventeen-year-old Cleo is determined to ride out the pandemic in the comfort of her own home, rather than in her quarantined boarding school dorms. But when the Red Cross pleads for volunteers, she can’t ignore the call. As Cleo struggles to navigate the world around her, she is surprised by how much she finds herself caring about near-strangers. Strangers like Edmund, a handsome medical student and war vet. Strangers who could be gone tomorrow. And as the bodies begin to pile up, Cleo can’t help but wonder: when will her own luck run out?
Riveting and well-researched, A Death-Struck Year is based on the real-life pandemic considered the most devastating in recorded world history. Readers will be captured by the suspenseful storytelling and the lingering questions of: what would I do for a neighbor? At what risk to myself?
An afterword explains the Spanish flu phenomenon, placing it within the historical context of the early 20th century. Source notes are extensive and interesting.

Why Am I Waiting?
I fell in love with In the Shadow of Blackbirds by Cat Winters (my review and interview with Cat Winters) and after reading I needed to know more about the 1918 flu epidemic so I did some online research. When I saw A Death-Struck Year I knew I’d want to read it for that reason.

Be sure to enter the 12 Days of ARCs Giveaway I’m hosting along with Stephanie from Inspiring Insomnia. We are unwrapping a book a day up until Christmas. So far we’ve revealed Avalon by Mindee Arnett, Dangerous by Shannon Hale, Awaken by Meg Cabot, The Winner’s Curse by Marie Rutkoski and Roomies by Tara Altebrando. Enter HERE