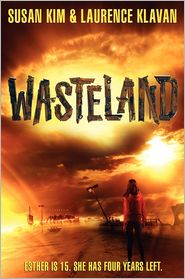 Summary (via Goodreads):
Welcome to the wasteland

At fifteen,
the citizens of Prin marry.

At seventeen,
they reproduce.

And at nineteen,
they die.

Esther thinks there’s more to life than toiling at the assignments—Harvesting, Gleaning, Excavating—day after day under the relentless sun, just hoping to make it to the next day.

Then Caleb shows up. Could there be another way to fight for survival?

The Story:
I wanted to be riveted and engrossed in this book, I really did. I even stopped midway and read a couple of books thinking perhaps I just wasn’t in the mood for it. Unfortunately, when I resumed reading the flaws were still glaringly present. For me,  the story jumped around erratically and details felt generally glossed over. Perhaps it’s because it’s narrated by an omnipresent voice that jumps from one character’s story to another with no warning (perhaps its only like this in the arc?) I constantly had to backtrack to find out when the story switched characters after reading a bit and realizing, ‘hey, wait we aren’t following Esther any longer’. The aspects I wanted much more depth and clarity (character development, the romance, the Variants…) all seemed as detailed as a summary. The entirety of the book felt like it was multiple summaries squished together. The idea behind this book is intriguing: a world where there are no adults and a battle raging between mutants and the teenagers, mystery and love. but none of it hit the mark with me. I never knew enough about any aspect to really get behind it and care. There are some unseen reveals after the midpoint but by then I hadn’t cared enough to see them coming.

The Characters:
There was not a single character I cared for. I didn’t dislike or like any of the cast- sadly I felt a general void. Our main characters, Esther and Caleb were just your typical characters, nothing stood out to me. Esther’s only separation from the typical heroine archetype was possibly her general rebellion. She chose to show her disdain for her society by not pulling her weight by refusing to do work assigned to her. She was friends with a variant which would have given me reasons for liking her and given depth and interest but the relationship was not developed much after the start of the book. One of the most interesting situations Esther finds herself in, the Valley of Death, is sadly devoid of much detail past the descriptions of dead bodies and flies. How she survives and finds herself free of this horrible place was completely ignored and summarized in a sentence. Caleb was probably the best of the characters, I tried to feel for his loses but I had trouble connecting with him. I found the most inspiring aspect of the story to be Caleb’s time in the Source…but he was only there for a short amount of time. As for the romantic aspect it felt rushed and when I love you’s were exchanged I felt nothing.

Final Thoughts:
Sadly, I can not recommend this to anyone, as I will not read any further in this series. I do not doubt in the least both authors writing ability or their creative ideas but the lack of depth and summary style of writing was just not compatible with me.

This arc was received by HarperTeen in exchange for an honest review.

Review of A Thousand Pieces of You by Claudia Gray
Review of Thin Space by Jody Casella
Review of Dance of the Red Death by Bethany Griffin
« Theo James cast as Four/Tobias in Divergent
Victoria Schwab, Beth Revis and Carrie Ryan Book Signing Event »