Thank you, Kristen! I’m pleased to hear the book moved you so much, and I’m excited to be here as your guest. I love that your main character is named after Mary Shelley, author of Frankenstein. What inspired your Mary Shelley’s story and character?
I’m glad you enjoyed her name. She originally showed up in my head as Mary Shelley Black and refused to be named anything else. I worried a little how readers might respond to me calling her that.

In the Shadow of Blackbirds first started off with the setting. For a long while, I’d been trying to write a book that involved the collision of WWI, the Spanish influenza, and the Spiritualist movement in the fall of 1918. Sometime later, Mary Shelley Black started showing up in other, unrelated book ideas of mine, but I hadn’t yet written her into a manuscript. After I spoke to my agent about what type of novel I wanted to write and how it seemed to be heading into the direction of YA fiction, it struck me that my bright, scientific, logical character-in-progress would be the perfect narrator for a time period that defies logic.

Have you always had an interest in history?
Yes, I’ve always been drawn to historical locales, fashions, and novels. I grew up in a Southern California suburb that was brand new when I was kid, so I think historical sites and stories intrigued me because they were the complete opposite of my own surroundings. My parents also raised me on old movies, from silent films to Hitchcock thrillers, so I’ve been particularly fond of twentieth-century history for as long as I can remember.

In the Shadow of Blackbirds touches on séances and ghosts and their popularity during the 1918’s. Do you personally believe in ghosts? Have you had an encounter?
I’ve heard about enough real-life ghostly encounters to believe they might really exist. My own paranormal experiences are limited to spooky images that appeared in photos I took during a trip to Maine, as well as a frighteningly vivid dream that could be explained away as a fever hallucination. I love visiting haunted historic homes and ghost tours, and I enjoy the tingly sensation that runs down my spine when I’m potentially in the company of spirits. I’m not sure why, but ghosts have fascinated me since childhood.

Photography takes an important role in your novel and you include very accurate and descriptive scenes centered on early 20th century photography methods. Are you a photographer?
Photography is a profession I admire and adore, but I’ve never taken a single photography class myself. I personally love taking pictures and wouldn’t say I’m terrible at it, yet I’m far from being an expert. Therefore, I spent a great deal of time researching early-twentieth-century photography techniques while writing In the Shadow of Blackbirds. Whenever I couldn’t find an answer on my own, I reached out to historical camera experts, photographers, and photo collectors.

At the beginning of every chapter period photography is featured; giving the reader a firsthand glimpse of what we are reading, such an amazing touch. Can you tell us anything about their inclusion in your book?
That was my idea. I decided to include the period photos for a few reasons. (1) As you already mentioned, photography plays a pivotal role in the plot. (2) Some early readers believed I was writing alternate history and thought I had made up some of the events, such as the 1918 Spanish influenza. I felt compelled to prove that this history actually occurred, and photos seemed an ideal way to do so. (3) I had been struggling to get my historical fiction manuscripts published for well over a decade, but publishers kept saying that historicals are too risky. I really wanted this book to stand out, so I tried to give it a little extra oomph by making it visually haunting.

Will we ever see any of the characters from In the Shadow of Blackbirds appear again in novellas or future novels?
I’ve toyed with the idea of writing a book from the perspective of Mary Shelley Black’s mother when she was a teen, but I haven’t gone any farther than the initial concept stage. Some readers have asked to see more of Jones and Carlos, two young WWI veterans who make a brief appearance in the novel. I may explore their stories sometime, but at this point I’m not actively writing any companion novels or novellas. The plots would have to be just right for me to want to mess around with the world and characters I’ve already established.

Speaking of future books, The Cure for Dreaming was just announced, congratulations! Can you tell us anything about it?
Thank you! I’m really excited about this second novel, which is scheduled to be released Fall 2014. The Cure for Dreaming takes place in 1900 America and involves a man who pays an up-and-coming young hypnotist to cure his seventeen-year-old daughter of rebellious thoughts. The cure, however, doesn’t go quite as planned.

Now to some more random questions:
What are you presently reading?
I’m focusing on nonfiction at the moment as I continue to work on The Cure for Dreaming. Currently, I’m reading Wicked Portland: The Wild and Lusty Underworld of a Frontier Seaport Town, by Finn J.D. John.

Is there a book or a character you wish you had written?
One of my all-time favorite characters is Atticus Finch from Harper Lee’s To Kill a Mockingbird. I love how he’s wise and just and good, yet he’s struggling to make things work as an older, single dad. Many YA and children’s books are missing parental figures who play an active role in the young protagonists’ lives, and I feel Atticus proves that kids can still go out and have their adventures, even when a loving adult is waiting for them at home. 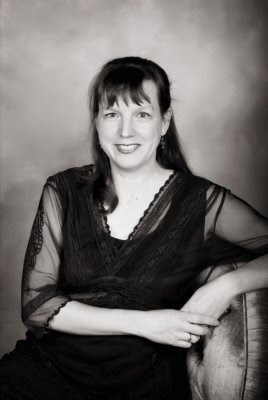 About the author:
Cat Winters was born and raised in Southern California, near Disneyland, which may explain her love of haunted mansions, bygone eras, and fantasylands.

Her critically acclaimed debut novel, In the Shadow of Blackbirds (Amulet Books), is the story of a sixteen-year-old girl who faces WWI, the Spanish influenza, and a ghost.

Cat currently lives outside of Portland, Oregon, with her husband and two kids.

Related Posts:
Review of In the Shadow of Blackbirds

Interview + Giveaway- Melinda Salisbury Author of The Sin Eater’s Daughter
Interview with A.G. Howard Author of Splintered (and giveaway)
Review of In the Shadow of Blackbirds by Cat Winters