Kendare Blake is the author of Sleepwalk Society,  Anna Dressed in Blood and Girl of Nightmares, and one of my top five favorite authors. She has a new series coming out this fall called Antigoddess. Also, it was just announced last month (January 2013) that Anna Dressed in Blood is in the works to become a movie by Stephenie Meyer’s (author of Twilight series) production company. I saw that Kendare Blake was attending the Montgomery County Book Festival and had the opportunity to interview her. 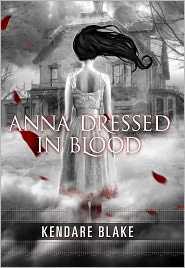 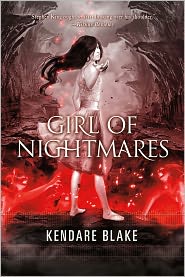 It was just announced that Anna Dressed in Blood is going to be made into a movie by Stephenie Meyer’s production company, congratulations! Is there anything you can tell us about it, or are you sworn to silence?
Unfortunately that’s about all I know at this point, I knew it was going to happen since June but haven’t been able to say anything about it until the news broke just this month. All I know is that they are in script phase and as soon as they know more hopefully they’ll let me know.

Has to be hard not being able to tell anyone?
Yeah, yeah but that’s the process. Unless you are a really huge author or they need your input because your series isn’t done and they don’t want to do anything in the movie that will negate the rest of the series. Usually we don’t have a lot to do with it or the casting.

Regarding casting, do you have anyone in mind that you think would be perfect for the film?
People will contact me and tell me, I think this guy would be great for Cas, or this is my perfect Anna and they’ll do fan art mash-ups. They have a little campaign going on for this actress, which I knew about beforehand who she was, Alexis Raich. This fan does all these mash-ups and she does a tweet a day, Alexis for Anna*. The actress has read the book and is a fan. But I have nothing to do with any of it, I like to hear about it but I have nobody in mind of my own. Although for Cas, this is kind of weird I didn’t see this suggestion coming: Dave Franco, James Franco but a little goofier. But numerous people have said, Dave Franco, that guy is hot. I guess Dave Franco is a hunk…

(At this point my husband has been googling and has a picture ready to show)
Ok, he does look a little hunky there.

What is your favorite book-to-movie or show adaptation?
That’s tough. I immediately spring to the mind Steven King. Because everything he writes eventually becomes a movie or show. Some of them are really good like the Shawshank Redemption. Yeah, I’m going to go with the Shawshank Redemption that’s the one I personally like the best. But, I am also going to go with the made for TV movie version of IT**, was Hilarious. I loved the casting they did; they actually got John Boy Walton to be Bill, which was nice. And John Ritter.

In Anna Dressed in Blood, your ghosts relive the last horrible moments of their death, obsessing and reenacting it. Where did you get this idea?
That one is a common lore. When people write about ghosts they tend to think they are stuck there from some horrible thing that happened and they can’t get out of the moment, so that one was based on lore.

My husband, Patrick, interjects:
Sorry to interrupt but I have to know if you watch any of the ghost hunter shows?
No, I don’t. I’ve watched a couple of episodes and they are really fun but I don’t watch them on a regular basis. Which one do you watch?

Ghost hunters has a lot of action. There are some other random ones, the show itself is campy but the actual video footage is really creepy and weird. When she (Kristen) said she was interviewing you, and you have a book with a ghost I had to know if you watched ghost shows or went ghost hunting.
I would love to go ghost hunting, I think it would be the most fun thing ever. There is a house you can stay at in Iowa that was a site of an ax murderer, a whole family worth of ax murderers and there is no electricity, there’s nothing just an old farm house and you can stay overnight. They’ll like cart you out there with your camping gear and be like, freakin see ya, good luck! I really want to do that.

He’s going to take me ghost hunting at some point, that and sasquatch hunting.
Nice. Sasquatch hunting might take you up to Seattle; they swear that’s where Sasquatch lives. (laughs) No guys.

Do you personally believe in ghosts?
Yes, just because it’s more fun to. I’ve never had a ghost experience. Someday soon maybe I will, I don’t know I hope so.

He has.
You have?

I actually have. I lived in a house where weird things happened. Had faucets that turned on by themselves. Like out of nowhere the faucet just came on full blast. We had to turn it off. Friends that slept over experienced things.
That’s the best you can hope for. (All laugh)

Your newest book, Antigoddess, is releasing this fall. Athena and Hermes are central characters, how much of your interpretation of their characters did you base on Greek myth?
Quite a bit in their base construction like Hermes is the God of thieves, he’s a messenger still. My Hermes, I didn’t know when I started writing the book, but he’s at least bi-sexual but probably mostly gay. Which is going to be upsetting to some of my female readers since Hermes is their favorite; they say he’s such a heart throb. All of my Gods are dying some horrible death, it’s kind of related to the type of God that they are. So Athena has kind of a cancer of owl feathers, like owl feathers just start coming into her lungs and coming up out of her skin and into her eyes and things like that. As in myth the owl is her sacred bird, she still has control over them and she’s still the virgin Goddess of justice and battle so, yes as far as their archetypes I’m sticking close to it. But they are also dying so they are taking on more human traits. As the book progresses they become more human and less God-like.

How many books are planned for the series?
Three

For someone that doesn’t know a lot about the Greek myths, where would be a good place to start?
I always loved the Iliad and Odyssey but not everyone loves epic poetry. So, I don’t know if that’s necessarily a good place to start. I’ve not read any of the Percy Jacksons but I’ve heard those are great. There are so many things out there that feature the Greek pantheon. Maybe Zena Warrior Princess.

Now to some random questions; what are you reading right now?
I usually have about three to four books going at a time. Right now I’m reading Breaking Point by Kristen Simmons, sequel to Article 5; I’m about half way through with that one. I’m reading a collection by Caitlin Kiernan, one of my favorite writers. And on the way I have The Road by Cormac McCarthy, The Wolf Gift by Anne Rice and maybe an early copy of N-o-s-4-8-2 and I just figured out its Nosferatu.

I’m glad you said that because I wouldn’t have gotten it.
At first I was like why would you call your book this? I’m assuming it’s some kind of Vampire thing but then again it could just be a time traveling serial killer of children and he just calls himself that. Either way it sounds interesting.

Have you ever modeled any of your characters on people you know?
I take little things from almost everyone I know and throw them in as character traits or behaviorisms because it just makes the characters a little bit more three dimensional. Thomas, in Anna Dressed in Blood, I gave him my best friend’s really crappy car. I don’t put actual people that I know into books but I do grab all their pets. So if you see a pet in a book, like Tybalt is my cat. I wrote my brother’s dog into the Antigoddess series. The black lab that lives in Morfran’s antique shop is actually the black lab who lived in an antique shop in Thunder Bay that was there when I went up to do some location research. I don’t know if her name is Stella but that’s the actual dog, she’s black lab that lives in an antique store.

You can tell because your animals are written perfectly, they have the right personalities, like we had a lab that acted just like Stella.
Yea, they are so cute, she is so cute. Every antique shop should have a dog.

I think most stores should have an animal.
And you wouldn’t think since she has all these delicate antiques and this dog has this thick, thumping tail but she does fine.

Do most people know you’ve used something as reference?… like your best friend can recognize her car in there?
And that is her favorite part of reading my books, is trying to find the pieces she knows. Like I based some stuff on her Dad. The second book Morfran reveals the he eats ring bologna for breakfast and calls it sausage, that’s her Dad. Her dad does that.

That is awesome! Thank you so much.

*I can not find this fan or their twitter handle… if you know them leave it in the comments and I’ll update the interview
** I found the TV version to be so scary! I’ve not seen it since I was a lot younger but man, never once thought it was funny…Tim Curry as Pennywise…stuff of my nightmares.