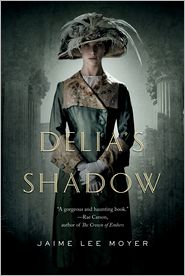 Summary (via Goodreads):
A dark, romantic fantasy set against the backdrop of San Francisco devastated by the Great Quake

It is the dawn of a new century in San Francisco and Delia Martin is a wealthy young woman whose life appears ideal. But a dark secret colors her life, for Delia’s most loyal companions are ghosts, as she has been gifted (or some would say cursed) with an ability to peer across to the other side.

Since the great quake rocked her city in 1906, Delia has been haunted by an avalanche of the dead clamoring for her help. Delia flees to the other side of the continent, hoping to gain some peace. After several years in New York, Delia believes she is free…until one determined specter appears and she realizes that she must return to the City by the Bay in order to put this tortured soul to rest.
It will not be easy, as the ghost is only one of the many victims of a serial killer who was never caught. A killer who after thirty years is killing again.

And who is now aware of Delia’s existence.

The Story:
Half crime drama and half paranormal Delia’s Shadow pulls from both genres melding them extremely well. Moyer successfully creates an eerie aura with enough anxiety to keep the reader’s interest. I adored the Victorian setting and felt that the book stuck well to the times and location it was representing.

This was the first book I’ve read, in memory, that alternated between first person (Delia’s point of view) and third person (Gabe’s story). I felt that this created an awkward mix in the beginning, feeling like two books rather than one. As I continued to read I acclimated and didn’t feel pulled out of the story when the shift happened.

My biggest issue with this novel was the lack of depth and detail put into the serial killer’s personality and character. I felt that when the big reveal finally happened it was a bit of a let down because there didn’t feel to me to be any major plot twists. Moyer had a few things twist and turn through-out the novel but none of them took my breath away.

The Characters:
I felt that Moyer did an exceptional job giving Delia a well rounded personality and showing the reader how life was for her being haunted and constantly at a ghost’s whim. I felt that the secondary characters were well done and felt very unique, Isadora being an easy favorite. There was a slight romantic aspect threaded through but was never the main focus of the story.

Though the point of view shifts were awkward, I found I enjoyed seeing things from both Delia and Gabe’s eyes. I think that alternating did give me a better look into the overall story arc but wished the switch could have been smoother.

Final Thoughts:
Overall Delia’s Shadow was an intriguing read though it dragged in places and could have used more details about the serial killer to help give the reader a legitimate fear of him.

Delia’s Shadow will be available September 17th by Tor

Review of The Storyspinner by Becky Wallace