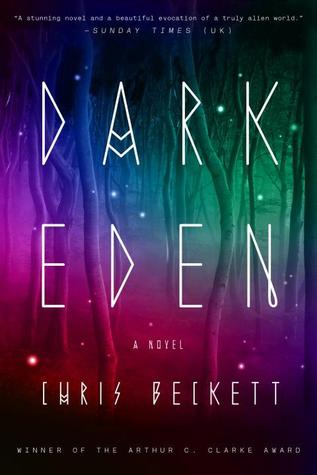 Summary:
On the alien, sunless planet they call Eden, the 532 members of the Family shelter beneath the light and warmth of the Forest’s lantern trees. Beyond the Forest lie the mountains of the Snowy Dark and a cold so bitter and a night so profound that no man has ever crossed it.

The Oldest among the Family recount legends of a world where light came from the sky, where men and women made boats that could cross the stars. These ships brought us here, the Oldest say—and the Family must only wait for the travelers to return.

But young John Redlantern will break the laws of Eden, shatter the Family and change history. He will abandon the old ways, venture into the Dark…and discover the truth about their world.

Already remarkably acclaimed in the UK, Dark Eden is science fiction as literature; part parable, part powerful coming-of-age story, set in a truly original alien world of dark, sinister beauty–rendered in prose that is at once strikingly simple and stunningly inventive

My Thoughts:
I entered a giveaway for Dark Eden on Goodreads on a whim; the cover looked beautiful and I’m always up for a science fiction book. I was blown away with the depth of this book. Beckett was able to delve into incredibly deep issues that not only were disturbing but added realism to the characters and their world.

Speaking of the world building–it was beyond fantastic. I was clearly able to see how people lived on Eden and understand their lives from the mundane to extraordinary. The details that Beckett provided were exquisite and painted a clear image of the people’s past living on this planet. If you read the summary up above you’ll know that Dark Eden follows an isolated group that sprung from a handful of crashed people. Dark Eden explored group dynamics, social order and was an exercise in psychology and anthropology.

The main aspect of this book was how a group of people inhabit and pioneer a civilization on an alien planet.  These people’s lives rotate around tales passed down about their ancestor’s history and experience on Earth. It was beautifully described and was able to show the clearest and most realistic depiction of people’s lives that I’ve read. I was in awe of Beckett’s ability to make me homesick for Earth as I read.

Not only is Eden richly populated with people but the creatures inhabiting this new world are beautifully described and creative. I was able to grasp their appearance, interactions with the colonists and loved how they were so strange and unique. You will most likely see some references to this book’s world to Avatar and I’d agree that the ‘feel’ are similar though the world itself is very different.

Beckett writes from several point of views but the two most prominent are from John Redlantern and Tina Spiketree. Each had an unique voice and take on the events that transpired throughout the story. I always felt at hands length from them both and had a disconnect to every character in this book. Because the world was so exquisite I was able to enjoy my reading experience and wasn’t bothered by my lack of connection.

I will give a fair warning–this is an adult book and there are some really disturbing topics explored as well as some animal violence (hunting). I could see how a good amount of readers would have trouble getting through some of those scenes.

Final Thoughts:
Dark Eden would have completely slipped under my radar had I not won a copy on Goodreads. Not only did Beckett create a world that was lush, cruel and alien he explored human nature and group psychology.  Regardless of the difficult subject matter and my disconnect from the characters I found this book to be enlightening and thought provoking.