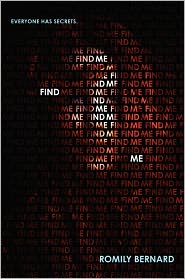 Summary (via Goodreads):
“Find Me.” These are the words written on Tessa Waye’s diary. The diary that ends up with Wick Tate. But Tessa’s just been found…dead.

Wick has the right computer-hacking skills for the job, but little interest in this perverse game of hide-and-seek. Until her sister Lily is the next target. Then Griff, trailer-park boy next door and fellow hacker, shows up, intent on helping Wick.
Is a happy ending possible with the threat of Wick’s deadbeat dad returning, the detective hunting him sniffing around Wick instead, and a killer taunting her at every step?

Foster child. Daughter of a felon. Loner hacker girl. Wick has a bad attitude and sarcasm to spare.
But she’s going to find this killer no matter what.

Because it just got personal.

The Story:
Bernard knows how to write suspense. Her scenes of struggle and escape were intense and vivid yet the description did not bog down the action. I was really impressed with her ability to convey fear and tension.

That being said I did have a few problems with this book. For the first part there was some computer jargon and time spent that I could have done with out personally but was essential to building up Wick’s character and her skills as a hacker. I found many aspects incredibly creepy and creative but I was pretty confident in who the bad guy was really early on. I hoped I was wrong, but I wasn’t. I think I could have enjoyed the experience more if it wasn’t so obvious to me where Bernard was taking the story.

The Characters:
Wicket was a strong character and I appreciated her struggles though I constantly wished she would confide with the authorities. I would not have made the same decisions as she did, but of course she had a very difficult life and I found it nearly impossible to really see things from her point of view.

As I stated above, I knew who the bad and good characters were very early, so I  was frustrated when Wick didn’t see what I saw. But, often times, that adds to the suspense–think horror film where you are screaming for the heroine to run. This was the case in Find Me, even having a pretty clear idea who was to blame I was still captivated in Wick’s search.

Final Thoughts:
Overall Find Me was well written; Bernard excelling at creating a suspenseful atmosphere. My biggest disappointment in the book was the ease in which I could see the outcome (early on) and my inability to connect with the main character or her relationships.