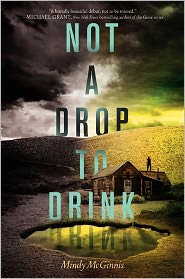 I read Not a Drop to Drink with my reading group Krys from Bibliopunkk and Jon from Scott Reads It. There’s nothing like reading a great book with friends.

Summary (via Goodreads):
Regret was for people with nothing to defend, people who had no water. Lynn knows every threat to her pond: drought, a snowless winter, coyotes, and, most importantly, people looking for a drink. She makes sure anyone who comes near the pond leaves thirsty, or doesn’t leave at all.

Confident in her own abilities, Lynn has no use for the world beyond the nearby fields and forest. Having a life means dedicating it to survival, and the constant work of gathering wood and water. Having a pond requires the fortitude to protect it, something Mother taught her well during their quiet hours on the rooftop, rifles in hand.

But wisps of smoke on the horizon mean one thing: strangers. The mysterious footprints by the pond, nighttime threats, and gunshots make it all too clear Lynn has exactly what they want, and they won’t stop until they get it….

The Story:
For this being targeted at young adults I was impressed with the gritty nature of Not a Drop to Drink. McGinnis doesn’t hold back in creating a world full of violence, desperation and the need to survive at any cost. The writing flowed smoothly and the descriptions were vivid enough to really transport the reader. Throughout my entire reading experience I felt gripped by anxiety and fully immersed in Lynn’s life and struggles.

The prospect of a world deprived of our most needed necessity, water, was haunting and eerily possible. Isolation and survival in the face of misfortune were major themes yet as the story progressed the tone changed to encompass hope and love. I was blown away with how smooth the transition took place before my eyes; no aspect of this book felt choppy or unplanned. From the beginning to end I felt complete faith in McGinnis’ storytelling and her ability to complete Lynn’s journey.

The Characters:
Not a Drop to Drink was one of the most impressive character driven novels I have read. I can’t recall the last book that had as seamless growth of the main character as this book had. Lynn starts out completely influenced by her mother and her alone. Her world is totally reliant and shaped by her home, their lake and her mother’s rules. McGinnis shapes and molds Lynn to adapt to her situations and the people she encounters. Her character’s growth is fueled by her experiences and is incredibly realistic and expertly done.

The secondary characters were not forgotten, McGinnis gave them all backstories and unique world views. I felt that I knew each of them and became attached fearing for their safety and outcome. I found it fascinating to think about how different personalities and situations would shape a person to handle a world so far removed, yet completely plausible, to our own.

Final Thoughts:
Not a Drop to Drink would be considered a dystopian or survival tale but this novel stands apart from the rest because of it’s incredible characters and unique atmosphere similar to an old western. This mix created something entirely new for me and absolutely addictive. I believe this is a stand-alone, which I am happy with, but I do want more from Mindy McGinnis’ mind.