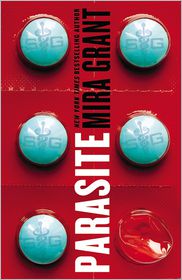 Summary (via Goodreads):
A decade in the future, humanity thrives in the absence of sickness and disease.

We owe our good health to a humble parasite – a genetically engineered tapeworm developed by the pioneering SymboGen Corporation. When implanted, the tapeworm protects us from illness, boosts our immune system – even secretes designer drugs. It’s been successful beyond the scientists’ wildest dreams. Now, years on, almost every human being has a SymboGen tapeworm living within them.

But these parasites are getting restless. They want their own lives…and will do anything to get them.

The Story:
This book traumatized me. So if you are really creeped out by things that are worm-like you should probably either stay away or prepare yourself. Grant is not overly descriptive in gory details but she created such a realistic world and the science behind it you can see the reality she created being plausible. Which to me, was terrifying. I was whisked back to those days of sitting in biology class learning of parasites and taking lab practicals.

We start the story as Sally is just waking from a coma in which the doctors and her family thought was impossible. She had been in a horrible car accident and had been legally classified as brain-dead. She wakes only to realize she doesn’t recognize her surrounding or the people around her; she has lost all memory of her life. Only by having the advanced SymboGen implant was she able to survive; due to this SymboGen wants to study her in detail and utilize her miraculous recovery for their benefit. The corporation along with her parents and her new boyfriend, Nathan, help Sal (she doesn’t go by Sally anymore) rebuild a semblance of life.

We follow Sal as she experiences this new life of hers and tries to understand what exactly happened to her. As she is living her life she starts to witness peculiar things happening and people acting oddly. Grant takes her reader through a slowly paced, incredibly interesting story line revolving around Sal. We stay within her point of view the entirety of the story so we experience events as she does. This adds mystery to the already gripping story. Though the pacing starts out slowly there is a creepy aura the entire time you are reading. I kept waiting for the next thing to happen; kept me on my toes and flipping pages.

The Characters:
Grant does a splendid job creating a character living after complete memory loss. I found Sal’s questioning of terms and learning of new vocabulary and popular culture terms endearing and realistic. Sal and Nathan have a strong and healthy relationship though it is not at the forefront of the story but it is a constant and driving force for he characters motivations. I had some trouble understanding her parent’s attitudes as the story progressed. I felt they had manic changes in personality at points and I couldn’t understand many of their actions.

I loved how Grant gave insight into the pioneering scientists by including magazine interview snip-its and video descriptions. She revealed only so much as the reader needed to start putting all the puzzle pieces together as well as getting a very informative peek into these characters.

Final Thoughts:
Parasite is a very unique and engaging book that left me feeling disturbed, squirmy and freaked out–but all in a good way. Would you get a tapeworm implant that would keep you healthy and take away any need for medicine? With my intense phobia for all things parasite and tape-worm I don’t think I could ever knowingly ingest a pill containing one.

Interesting side-note: the book actually killed my appetite so weight-loss by reading 🙂

Want to know more about SymboGen and their implant?

Review of Ivory and Bone by Julie Eshbaugh
Review of Grounded by G.P. Ching
« Crown of Midnight in Blocks
Waiting on Wednesday #11 »