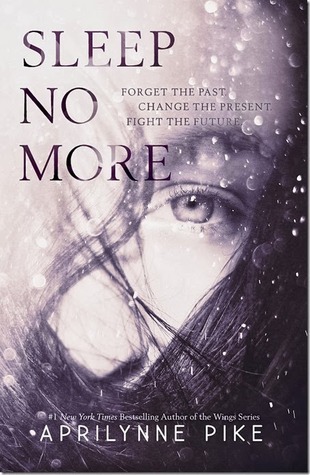 Summary:
Charlotte Westing has a gift. She is an Oracle and has the ability to tell the future. But it doesn’t do her much good. Instead of using their miraculous power, modern-day Oracles are told to fight their visions—to refrain from interfering. And Charlotte knows the price of breaking the rules. She sees it every day in her wheelchair-bound mother and the absence of her father. But when a premonition of a classmate’s death is too strong for her to ignore, Charlotte is forced to make an impossible decision: continue following the rules or risk everything—even her sanity—to stop the serial killer who is stalking her town.

My Thoughts:
Sleep No More offered a fun reading experience with a fast paced plot and a subject I find interesting…Oracles and changing the future. I found Pike’s writing to be easy to read though it does tend to be simplistic and lacks the real emotion that I’d hope to find in such a deep and disturbing subject. Following along Charlotte’s story I was always removed from what she was experiencing and never felt the fear, stress or anxiety she felt.

I had two glaring issues with this story-one being that Charlotte’s aunt was so secretive about oracle knowledge. I can’t go into details or examples without being spoilery but I’ll just say that I think it was unbelieavable that Charlotte would be so in the dark about her powers.

Second problem was with Charlotte herself. She was completely naïve and this will be a spoiler but a very slight one since it happens maybe fifty pages into the book. She gets these creepy texts such as,

You are the only one who could have helped her. Why didn’t you? page 54

And what does she do? She calls the guy and meets up with him! I would never do that and I can’t fathom anyone in their right mind being that trusting. Then he goes on to tell her that he’s been stalking her, but casually, since she was a ten year old! If he hadn’t already set off my stranger danger warnings this was out of control. Did she pick up and RUN? No! She continued to trust him. I couldn’t deal with that.

These two aspects pulled me from the story and made it difficult for me to believe and connect.

Beyond that, Sleep No More had a few things going for it. Much of this book is a page turner, especially after the midway point. The set-up was very well done and there are some really creepy scenes and Charlotte had some disturbing and horrifying hallucinations. Pike did a good job at describing what Charlotte was seeing and explaining the oracle realm vs the real world. It wasn’t nearly as confusing as it could have been.

The character relationships felt lacking to me as well. I never felt that Charlotte had a real connection to anyone around her. Though people being murdered were acquaintances and even past friends she never showed any real emotion towards them or their situations. Linden, who was Charlotte’s love interest, was never appealing to me and I couldn’t ever feel any chemistry between them.

Final Thoughts:
I did enjoy reading Sleep No More though I had some majors issues with the main character, Charlotte. I felt that her naiveté was more a plot device rather than a realistic reaction to the events happening around her. The characters felt hollow to me and I never felt any depth of feeling from Charlotte. I’d say this book was a fun ride but don’t expect any real character depth.