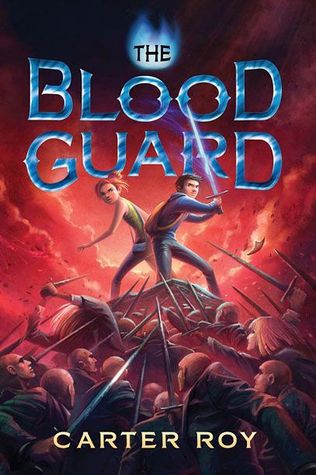 A copy of this book was sent to me buy the publisher in exchange for an honest review.

Summary:
When thirteen-year-old Ronan Truelove’s seemingly ordinary mom snatches him from school, then sets off on a high speed car chase, Ronan is shocked. His quiet, nerdy dad has been kidnapped? And the kidnappers are after him, too? His mom, he quickly learns, is anything but ordinary.
In fact, she’s a member of an ancient order of knights, the Blood Guard, a sword-wielding secret society sworn to protect the Pure—thirty-six noble souls whose safety is crucial if the world as we know it is to survive. Now all those after-school activities—gymnastics, judo, survival training—she made him take, make sense. For suddenly Ronan is swept up in a sometimes funny, sometimes scary, but always thrilling adventure—dashing from one danger to the next, using his wits to escape the Bend Sinister, a posse of evil doers with strange powers. Falling in with two unlikely companions, Greta, a scrappy, strong-willed girl he’s never much liked and Jack, a devil-may-care teenage pickpocket, Ronan is left with only his wits and his mom’s last words of advice: Trust no one. That’s a lot for an ordinary kid to deal with. But then again, maybe Ronan’s not ordinary at all.

My Thoughts:
I don’t typically read middle grade books but I’ve been sent a few for review lately so I’m seeing if I enjoy them. I found Carter Roy’s The Blood Guard to be fast paced, fun and action packed. I found this book focused more on the action scenes than character development and growth. I prefer an even approach to growth and action so this didn’t appeal to me as much as I’m sure it would for the targeted audience.

The action sequences were written very well and were easy to visualize. The Blood Guard wasted no time dropping Ronan, our young, unlikely hero, into his adventures and once the ball was rolling he jumped from one escape act to another. It was fun watching him embrace his hidden skills and discover what his family has been tied into. I felt that all of his reactions seemed likely for a thirteen year old and I did feel his character had growth though it wasn’t the majority of the story.

The secondary cast was a huge success for me. Both of Ronan’s companions, Greta and Dawkins, were unique and highly likeable. Greta was a great female character and I found it very easy to root for her and understand where she was coming from. I loved her interactions with the other characters. It was nice to see her stand up against the crazy events she has been thrown into. Her and Ronan are a great team on their adventures. My favorite character by far was Dawkins. He had the funniest lines and to me, held the story together.  I’d love to read a young adult book focused solely on him.

I was happy to see well rounded villains who believed in their goals. I love it when a villain truly believes in their cause, to me, this is the scariest and truest form of bad guy. I loved Roy’s explanations of what the Blood Guard were and their role in history and in Ronan’s life.

Final Thoughts:
Though I’m not a common reader of middle grade fiction I found The Blood Guard to be absorbing, well done and fast paced. I enjoyed the characters and the action scenes were vivid and clearly written. I would love to see Roy explore Dawkin’s character and life in a young adult book. I am confident his adventures in a more mature world would be amazing and incredibly entertaining.

Review of The Falconer by Elizabeth May