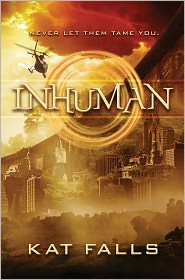 Summary:
In a world ravaged by mutation, a teenage girl must travel into the forbidden Savage Zone to recover lost artifacts or her father’s life is forfeit.

America has been ravaged by a war that has left the eastern half of the country riddled with mutation. Many of the people there exhibit varying degrees of animal traits. Even the plantlife has gone feral.

Crossing from west to east is supposed to be forbidden, but sometimes it’s necessary. Some enter the Savage Zone to provide humanitarian relief. Sixteen-year-old Lane’s father goes there to retrieve lost artifacts—he is a Fetch. It’s a dangerous life, but rewarding—until he’s caught.

Desperate to save her father, Lane agrees to complete his latest job. That means leaving behind her life of comfort and risking life and limb—and her very DNA—in the Savage Zone. But she’s not alone. In order to complete her objective, Lane strikes a deal with handsome, roguish Rafe. In exchange for his help as a guide, Lane is supposed to sneak him back west. But though Rafe doesn’t exhibit any signs of “manimal” mutation, he’s hardly civilized . . . and he may not be trustworthy

My Thoughts:
When I requested Inhuman I was drawn to the dystopian nature of the summary and the world going feral. Inhuman provided both of these things though I wasn’t sold on the presentation. A virus has spread over society and the only way the people can save themselves is by migrating and constructing a huge wall to keep everything out of their sterile world. I really liked how Falls handled the idea of a virus overrunning our society and how we might try to survive contained.

After making it into the forbidden lands I began to worry about the direction the story was going. The animal-human mutations veered on silly at times with their dialog, descriptions and fact that they were referred to as manimals. I admit that the descriptions were fairly accurate to how I would expect a hybrid to appear, but for some reason it came off almost goofy. As I read, I imagined what would happen if this was turned into a movie and how horrible I’m sure they would look.

This book falls under many of the typical young adult dystopian tropes. You have a naïve yet loyal, strong willed girl thrown into a situation she couldn’t possibly have dreamed of. Of course, she encounters two men that are complete opposites though they attract her for those differences. One guy is tall handsome, put together, honorable and heroic. The other is rough around the edges, rude but mushy on the inside.

As you can see there is a touch of the dreaded love triangle but not too much focus was spent on this aspect and the main character seemed to realize she should be focusing on the task at hand rather than her next love interest.

The beginning showed potential and there was a section (roughly around 45%) where I was really enjoying where things were going and the dialog between characters. I started to have high hopes that though I felt the manimals were silly this book would turn out to be one I overall enjoyed. Sadly, soon after this point the story took a turn and it felt like the book had an identity crisis. I wished that I could have enjoyed more than the small portion of the story.

Final Thoughts:
I wish I could say I enjoyed this book more thoroughly. Inhuman felt very close to being good and I think with some reworking of the storyline it could have been much more successful. The author had some great dialog and her characters were very close to redeeming any problems with the story flow and issues of incongruent tone.

For Review (via Publisher): What did you get last week?