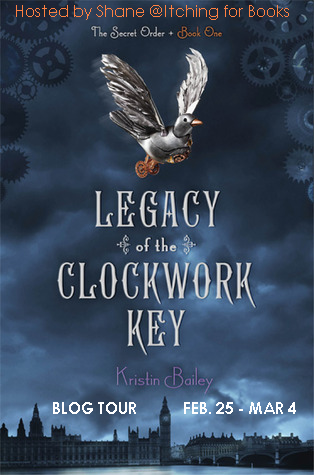 Synopsis via Goodreads:
A teen girl unravels the mysteries of a secret society and their most dangerous invention in this adventure-swept romance set in Victorian London.

When a fire consumes Meg’s home, killing her parents and destroying both her fortune and her future, all she has left is the tarnished pocket watch she rescued from the ashes. But this is no ordinary timepiece. The clock turns out to be a mechanical key—a key that only Meg can use—that unlocks a series of deadly secrets and intricate clues that Meg is compelled to follow.
Meg has uncovered evidence of an elite secret society and a dangerous invention that some will stop at nothing to protect—and that Meg alone can destroy. Together with the handsome stable hand she barely knows but hopes she can trust, Meg is swept into a hidden world of deception, betrayal, and revenge. The clockwork key has unlocked her destiny in this captivating start to a trilogy.
Kristin Bailey does a beautiful job describing in exquisite detail her clockwork amusements in Legacy of the Clockwork Key. Her words are able to paint the picture of how each works and looks. My favorite was her description of the clockwork animals:

Dark brass and copper gears swirled in the bird’s breast, just beneath smooth dark wings. Two wheels instead of feet had been set on short brass legs. The body looked real, with real feathers, and the eyes were clear black beads. The brass beak had been so carefully crafted, the stately bird seemed as if it could come alive and steal the crumpet off my plate.

The horses were just like the illustrations in the book, and yet to see them real before me took my breath away. Silver plates formed their bodies, making them look like armored horses from the days when knights jousted for a lady fair. Each line, each seam in the plates was a graceful work of art. Instead of legs, they stood on large wheels with woven spokes that looked like shining frost on perfect spider webs. Every detail, from the soft curl of brass that made their long eyelashes to their wire manes tied neatly into little knots along the crests of their necks, was exquisite.

You can see the amount of imagination and creativity Bailey possesses in her descriptions. Kristin Bailey grew up in the middle of the San Joaquin Valley in California. As a kid she enjoyed visiting the beach, camping and skiing with her two brothers.
Now she is a military wife and mother of two young children. She is also terrible about spoiling her pets. She has one fluffy mutt, two cats who think they own the world, and a fish tank with a quartet of fat fish, and two secretive striped ninja-assassin snails.
In the course of her adventures, she has worked as a zookeeper, balloon artist, and substitute teacher. Now she enjoys writing books for teens who enjoy mystery and adventure as much as she does.
www.kristinbailey.com | twitter.com/KBaileyBooks