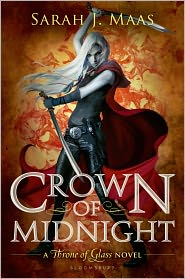 I’m reading Crown of Midnight the sequel to Throne of Glass. I am loving it and it might just be even better than the first.

For a heartbeat, there was something in his eyes that reminded her of a world long-since burned–a glimmer of color and power that still stalked the edges of her nightmares. But he blinked, and it was gone.  Page 147

Where do the assassin’s loyalties lie, and who is she most willing to fight for