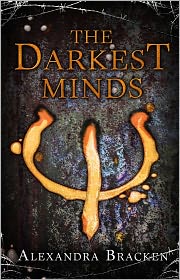 Summary (via book cover):
When Ruby woke up on her tenth birthday, something about her had changed. Something frightening enough to make her parents lock her in the garage and call the police. Something that got her sent to Thurmond, a brutal government “rehabilitation camp.” She might have survived the mysterious disease that had killed most of America’s children, but she and the others emerged with something far worse: frightening abilities they could not control.

Now sixteen, Ruby is one of the dangerous ones.

When the truth comes out, Ruby barely escapes Thurmond with her life. She is on the run, desperate to find the only safe haven left for kids like her –East River. She joins a group of kids who have escaped their own camp, Liam, their brave leader, is falling hard for Ruby. But no matter how much she aches for him, Ruby can’t risk getting close. Not after what happened to her parents.

When they arrive at East River, nothing is as it seems, least of all its mysterious leader. But there are other forces at work, people who will stop at nothing to use Ruby in their fight against the government. Ruby will be faced with a terrible choice, one that may mean giving up her only chance at having a life worth living.

The Story:
Alexandra Bracken creates an America that has lost sight of all the good characteristics. I hate to even think it would be possible for adults to turn on their children if a disease either killed them or mutated them into having unusual (and frightening) abilities (maybe a bit like X-Men?) But, history has proven that horrible things happen and people do things we never dream they could or would. Bracken focuses her story on Ruby, a character she has drawn out vividly. You, as the reader, are thrown into the horrible situations Ruby finds herself in and like her you have no idea who to trust. Its gives the reading experience a tad bit of stress. Certain parts are heart wrenching, painted so realistically you feel the ache the characters feel. I found myself constantly wanting to grab Ruby and hug her (regardless of the danger). Even when things appear to be looking up you still have that feeling of just waiting for something bad to happen. The calm before the storm. What pulls you forward are the questions you have about what has caused this disease and will Ruby ever be safe?

The Characters:
A lot of the secondary characters are glossed over and we have no real idea of their motivations rather than for power or out of fear. At the beginning all of the characters, save our heroine, have horrible characteristics and show no compassion towards the children. Like the camp PSF officers, an example

We all turned at once, just in time to see the PSF with the flaming red hair launch the butt of her rifle into the teenage boy’s mouth. (pg. 12)

I know, personally, I would like to have seen at least one officer show just the smallest fraction of kindness. It seems so unreal that adults could all feel so much hate towards children (though this would be the point of the book). I know, as a parent, I would never be able to see myself treating children so horribly. To counter the anger and fear the adults show the adolescence we do get a peek into how deranged some of the kids are, like Martin. Who is just itching to jump in the fray and hurt someone.

Unlike the secondary characters the main cast are very well developed. Bracken presents a wonderful lead character in Ruby. I was immediately drawn to her and her plight. Small bits of Ruby’s life prior to the disease give such depth and a sense of the immense amount she’s given up in a very touching yet subtle way. Contrasting small bits of her past shows the great contrast between life before and life after the disease. The way Bracken has Ruby think back on her thoughts as a nine year old about to be  ten was really realistic to me,

When I was about to turn ten years old, the most significant thing about the number was that it was double digits.

I remember thinking that exact thing right before I turned ten. It was this huge thing to be in the double digits. Those little bits of Ruby’s personality and thoughts made me relate to her which just made her experiences that much more real for me. Though we don’t get to reside in the thoughts of Chubs, Liam or Zu you still get to know them as Ruby does.  I hope we get a lot more back story about each of them.

Parts in the middle when they are on the road dragged a bit for me but the last third of the book more than made up for it with its roller coaster of emotions. When I finished I just sat there feeling my heart pound and trying not to cry. It was a very powerful book and I will continue reading the series.

Check out an interview with Alexandra Bracken on Publishing Crawl

Review of Rook by Sharon Cameron