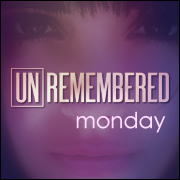 Jessica Brody the author of Unremembered (releases March 5, 2013) is hosting a new meme: Unremembered Monday. She asks: which book would you like to Unremember so that you can read it again for the first time?

I originally picked up Cassie Clare’s Immortal Instruments series and decided then and there that I would read anything she published. When Clockwork Angel came out I didn’t even bother to read the summary, I just grabbed it up. I ended up loving it and the Infernal Devices series the most.

What book would you like to Unremember so you could read it again for the first time?