Waiting on Wednesday is a weekly meme hosted by Breaking the Spine that spotlights upcoming releases we are highly anticipating. This week’s pre-publication “can’t-wait to-read” selection is: Thin Space by Jody Casella 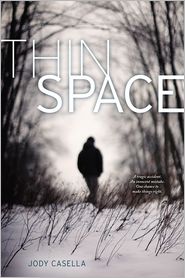 Why am I waiting on Thin Space?
I love the idea of a point in the barrier between here and the other side. It is a really intriguing idea and I can’t wait to read where Casella takes the story.